Variable Fonts: a new era in typographic flexibility and performance

Variable Fonts present a new way of storing multiple variants of a typeface in a single font file. Through adjustable parameters, this approach allows for more flexibility in design. Unlike traditional font files, which are static and contain a set of predefined designs, Variable Fonts allow the user to adjust predefined parameters, such as weight, slant, and width, in real-time.

has the expert knowledge needed to create Variable Fonts tailored to your needs, either from an existing typeface family or from scratch. Wether your goal is to reduce your number of font files to distribute, simplify your workflow or improve loading times of your website – we’ll optimise the Variable Fonts to your usecase.

Benefit from our Variable Fonts skills

Variable Fonts are superior to traditional fonts in a number of ways: They allow for greater flexibility and customization in design, by allowing designers to adjust a range of parameters, such as weight, slant, and width, to create custom designs on the fly. This is not possible with traditional fonts, which are static and contain a set of predefined designs. Combined with the power of OpenType Features, Variable Fonts amount to manifold typographic possibilities for designers.

Variable Fonts are also more efficient in terms of storage, because they only store the differences of the different designs, rather than a separate file for each design variation, leading to space savings of up to 30% of static font files. This can be particularly useful for environments that need to load a large number of font files, such as websites or single page applications (SPA).

How and when to use Variable Fonts

To use a Variable Font, a designer can specify the values for the adjustable parameters (provided the environment supports Variable Fonts), and the according font will be available on the fly, allowing for the creation of unique designs that would not be possible with traditional font files. This flexibility can be useful in a number of scenarios, such as creating a design that matches a specific brand identity, or creating a design that is optimised for a particular device or screen size.

One of the most useful applications of Variable Fonts is on websites, due to both their technical and design benefits compared to static font files. Using a traditional font file, websites will have to load a separate font file for each design variation, such as different weights and widths. This could quickly become unwieldy and lead to slow performance.

With a Variable Font as a webfont, websites can load a single font file that contains all of the needed (and even more) design variations – even different typefaces. These variations can simply be accessed via the website’s stylesheets (CSS) by defining the values for the Variable Font’s parameters like any other property, and the desired designs will be generated on the fly. This is much more efficient, both in terms of performance and storage, and allows for a wider range of design options.

The development of the Variable Fonts format can be traced back to the early days of digital typefaces, when type designers began to explore the potential of digital technologies to create new and innovative font designs. Over time, these early efforts led to the development of a number of different technologies and techniques that allowed type designers to create custom fonts by adjusting a number of parameters in their design files, such as weight, slant, and width. 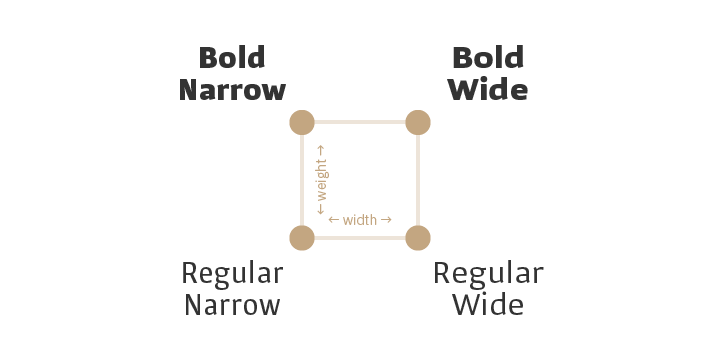 In the 2010s, these technologies and techniques began to be standardised and integrated into a single font format, now known as the Variable Fonts (GX) format. The Variable Fonts format is an open format that was developed by the OpenType font format working group, and is supported by most modern operating systems and applications. The format allows type designers to create a single font file that contains all of the variations and styles within a typeface family (or even beyond), and allows users to access and use these variations through a simple and intuitive interface.

The development of the Variable Fonts format has been a major milestone in the history of digital typefaces, and has opened up a new world of possibilities for type designers and users. The format allows for the creation of custom fonts that are flexible, scalable, and adaptable, and has the potential to revolutionise the way that fonts are used and distributed on the web and in other digital environments.

We’ll provide you with the Variable Fonts you need.

As a small studio with a network of distinguished experts, combines the best of both worlds: we consult personally and promptly, are able to tackle projects of any size and charge reasonable rates.

Besides typeface design and technical font production, we also offer typographic and technical consulting. During online or on-site workshops, we share our expert knowledge with design colleagues.